What had I gotten myself into? Weeks before school started, the unorthodox teacher knew he needed help both from above and in the trenches. A growing sense of anxiety gnawed at his lack of teaching skills, knowledge, and experience. He had a Master’s Degree, but in Oceanography, not Education. His exposure to teaching was what he received as a student, and that didn’t always conjure up good memories. No, he needed a mentor, a confidant, a friend. Someone who would warn him of the common pitfalls new teachers make. A person who would happily share best ideas and practices, and be a phone call away to look over lesson plans or anything else used in the classroom. A master tactician who knew how to keep a potentially rambunctious group engaged, while maintaining good relations with parents. With but one week till classes at St. Mary’s Academy started, the unorthodox teacher had not found that much-needed mentor, and his sense of dread was approaching a calamitous level. And then he met Al. 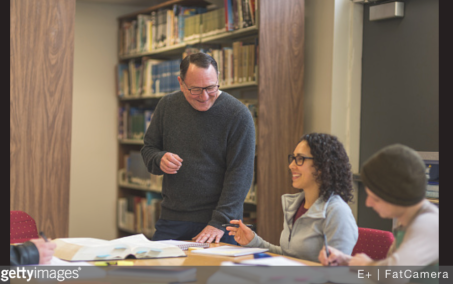 Al was an older guy I met on the Saratoga Springs YMCA racquetball court. New to the area, and in my first week of school, I was hanging out at the courts hoping to find a game. In no time, I was invited to play doubles, and Al was my partner. I don’t remember whether we won or lost the game, but I knew I’d won a friend and mentor that afternoon when Al asked what I did for a living. Al was a veteran Advanced French teacher with 30+ years experience, and I felt a virtual arm drape across my shoulders when I told him I was a new teacher in my first week of teaching. Though 30+ years had elapsed since Al first started teaching, he understood my situation. Al and I would continue playing racquetball together, but we spent more time talking teaching. He was my lifeline. My mentor. My friend and confidant. He told me how to get students engaged in the lesson. The importance of having fun in class. Why relationships matter. How poor kids sometimes are disadvantaged. That not all students learn the same way. To forgive yourself for mistakes. To be honest and admit when you don’t know the answers. To play games embedded with content. To not take things students say or do personal. To enjoy the greatest career in the world.

Reflecting back 30 years, I remember my first mentor as if it were yesterday. The relationship and trust that developed between Al and me were indelible, and though I would find other mentors over the years, none were as that first new teacher-mentor experience. I would become a mentor myself, and do my best to cultivate what Al and I had. The New York State Education Department (NYSED) would eventually offer grant monies for districts to create mentor programs, responding to the tragically high attrition rate in teaching. I would participate as a professional developer in many of the NYSED funded mentoring programs, and would come to find the most successful programs were those that focused on relationships, trust, and coaching.  Programs that focused on finding the right mentor. A mentor skilled in his or her craft, and who cared deeply about students, colleagues, and learning. One who would become the trustworthy confidant a new teacher could lean on.  Al was such a person.

Join 1,865 other followers
Follow Teaching and Learning on WordPress.com