How did you discover your career? Was it one you dreamed of in grade school, or one that happened serendipitously later in life? Here’s my story on how I found teaching.

In August of 1987, my boss at the United States Naval Oceanographic Office came to my work space one afternoon and said, “Bay St. Louis Middle School called to request a public speaker at their fall assembly.  They want one of us to talk about what it’s like being an oceanographer. Steve, would you like to go and speak there?” My candid response: “Not really. I don’t like being in schools and don’t have time to talk with kids.” My boss gently reminded me, “Steve, since no one else wants to speak at the middle school, and since you are the last to be hired, it’s not really a choice.” I replied with a  smile, “George, I’d be happy to speak at the assembly.” And from that short conversation would come a life altering and fortuitous change of career from well paid oceanographer to under paid secondary school science teacher. 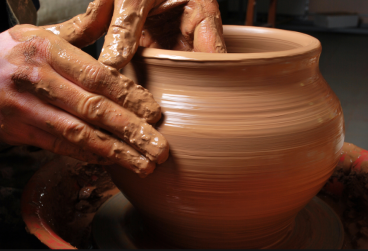 I will confess I prepared for my fall assembly “What’s it like being an oceanographer?” speech with great confidence and cockiness. After all, I thought to myself, I was an oceanographer, and this was a speech at a public middle school. Plus, I knew from my 13 years experience as a student in K-12 education that teachers finished work at 2:30 in the afternoon, had generous vacation time, and the entire summer off–Wrong!! Though I wasn’t looking forward to taking time from work to do a presentation, I did know in my heart the talk would be a piece of cake. Boy was I mistaken!

The assembly was scheduled for 1:30 PM, and I arrived early to get my bearings. There are two schools that serve middle school students in Bay St. Louis, Mississippi: a private school where those with the means send their children, and the public school for those who can’t afford the private school tuition. My speech would be at the public school in a hot, humid auditorium. No problem. I came prepared with suit jacket, short sleeve shirt, and my speech neatly typed. I was ready.

At 1:2o, the intercom blared out for all teachers to bring their classes to the auditorium for the assembly. Within minutes the quiet, subdued auditorium with its fading and chipping painted walls and ceilings sprung to life as 250 high energy white, black, and hispanic students spilled in and began filling rows of seats beginning but 10 feet from the stage. I eyed them with curiosity and a little resentment as they scampered loudly to their seats, their teachers clearly exasperated with the noisy interruption of the normal day’s routine. Within ten minutes the students and teachers had settled into their seats, I’d been introduced by the school principal, and so began my speech.

Humility is a funny thing. It sometimes comes unexpectedly and from unforeseen sources, and so was the case with my talk. After a mere five minutes into my presentation, two boys but 15 feet away from the stage starting laughing and heckling me. Their teacher cast them a stern look and gave them a loud “SHHHHHH”, which worked for about 30 seconds before a few others in the audience started to heckle. I knew I was in trouble. My confidence and sense of authority dissipated quickly into one of fear. Was the auditorium getting hotter, I wondered, as the heckles continued and drips of sweat rolled off my chin and onto my typed speech. I was free-falling down a path I had not been on since adolescence. I was petrified and unsure what to do. The speech clearly wasn’t working, and so I took a leap of faith, dropped the air of superiority, and spoke earnestly from the heart.

It was as if a light had been switched on. As I opened up and shared my excitement about oceanography, the funny and scary stories of work out on open waters or along coastlines of foreign countries, I relaxed and connected with the students. And they did the same. The more I let my guard down and opened the floor to their questions, the more I felt a surge of satisfaction and self-actualization. The assembly ended with laughter, more stories, and thankful applause. I didn’t want it to end, but the principal reminded students school would be out shortly with busses waiting to take them home. I left Bay St. Louis Middle School on a high. One year later I was teaching physics and chemistry in a small Catholic school in upstate New York. How lucky was I!

A lot has happened over the ensuing 30 years, but to this day, I always urge students, colleagues, friends, or anyone else willing to listen to follow their hearts. Chase the work, not the money. Money comes later as you thrive in a career that is satisfying. A career where Monday morning is a good thing because you’re back doing what you love.  Peace.

4 thoughts on “Finding My Calling To Teach”